Innovators and inventors at the University of Minnesota (UMN) come from a variety of schools and departments, and often wear multiple hats when it comes to advancing their research innovations to the marketplace.

For example, Yingling Fan is professor of Urban and Regional Planning at the Humphrey School of Public Affairs, and she is also a technical innovator and startup founder of Daynamica, a technology company commercializing Fan’s smartphone-based system for capturing digitized human activity data in the context of daily living. Fan has been interested in how people interact in public spaces for a long time. Her research focuses on urban land use, transportation planning, and the impacts of urban planning on human health and social equity.

Fan worked with Julian Wolfson, associate professor in the Division of Biostatistics, School of Public Health, and Gedas Adomavicius, professor of Information and Decision Sciences, Carlson School of Management, to combine GPS technology with a questionnaire in a smartphone-based system to generate digitized human activity data. Used as a research tool, the app was able to digitize people’s daily activities and lived experience in a city and capture information that academic institutions and government agencies could then use to understand issues such as transportation and health needs for citizens.

They developed the app over the course of five different projects funded through various sources, including the University of Minnesota and the National Science Foundation. During this time, smartphone technology was changing rapidly, with new devices and changing operating systems requiring them to continuously re-examine their code and make necessary updates. They started to receive several requests from academic researchers in different metro areas outside the University of Minnesota who wanted to use their technology to collect data for their own social and health sciences research.

After receiving these requests, Fan and her team realized their research had commercialization potential and they worked with Chris Ghere in the Technology Commercialization office (also known as OTC or Tech Comm) on a patent for the technology, which they secured in 2017. They then worked with Tech Comm’s Venture Center, to launch a startup company as a way to get the technology in the hands of more users because creating a new company provided more resources and flexibility for them to work with businesses or other organizations who are interested in understanding human behaviors, perceptions, emotions, and experiences in the context of daily living.

They worked to identify their beachhead market as described in this two minute video, and in 2018, Fan co-founded Daynamica. She began as the Chief Executive Officer (CEO) but later realized that due to her academic duties, she only had capacity to work eight hours a week for the company.

“One of the lessons I learned is that delegation and time management is very important when running a company,” said Fan.

As the business grew and they acquired more clients, it became important for someone to have more availability to serve as the CEO. Fan decided to become the Chief Science Officer (CSO) so that she could focus on crafting the language about their product for the scientific community, as well as coordinate the NIH STTR grant they received.

Fan’s advice to other UMN researchers is to get in touch with Tech Comm early and to build a relationship.

In particular, Fan recommends that researchers attend OTC webinars and other events to learn more about areas of commercializing innovations that you might not be exposed to as a researcher.

“Being an academic has many privileges: there is no need to worry about finances (we receive university salaries) and we have plenty of staff support ranging from grant administrators who help us to prepare proposal forms to accountants who can handle reimbursements  to communication staff who can promote our work,” said Fan, “When you run a company, you have limited resources and all the support and assistance that you take for granted as an academic no longer exist. You have to pay all the bills. In addition, being an academic is about pushing the knowledge boundary and exploring new fields, while running a business is about finding consistency, scalability, and repetition for expansion and revenue growth.”

In November 2020, Fan spoke to attendees of the UMN Women Innovators conference to share how her research goals ultimately led her to co-found a startup company and launch a successful commercial product. She emphasized the importance of shifting from purely academic to entrepreneurial thinking.

"We tend to focus on what we could do as academics," said Fan. "When you transition to the entrepreneurial phase, it's important to focus on what you should do from a business development perspective." 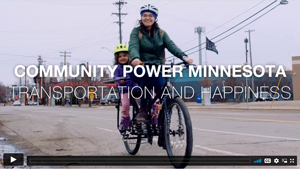 Watch Community Power Minnesota: Transportation and Happiness to learn more about the impact of Fan's work.

Learn how University Inventors can advance their own research innovations.