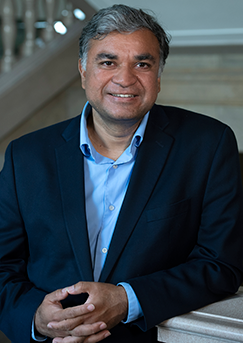 Shashank Priya serves as the University of Minnesota’s vice president for research, a role he assumed on September 30, 2022. In this position, he oversees a $1+ billion research enterprise across all campuses and facilities. He manages units responsible for administration of sponsored projects, research and regulatory compliance, and technology commercialization, as well as 10 interdisciplinary academic centers and institutes. He also oversees a growing corporate engagement portfolio for the University.

Prior to joining the University, Priya served as associate vice president for research and director of strategic initiatives at Penn State, where he managed several functions of the research office, including the Limited Submissions, the Office of Postdoctoral Affairs, the Commonwealth Campus Research Program, the Strategic Interdisciplinary Research Office (SIRO), the equipment program for core-facilities, and the International Joint Innovation Partnerships. During his tenure, he reorganized SIRO and doubled its size which led to an increased number of proposal submissions with high funding rate. He seeded research activities across Penn State’s multiple campuses in form of small grants to work with core facilities and large grants to form center nodes. He also grew international research partnerships with universities in Europe, Australia, and Asia and worked with university-wide core facilities to develop plans for equipment needs. As part of his strategic initiatives portfolio, he organized faculty teams on developing new ideas and worked with them on securing funding.

At Penn State, Priya was a materials science and engineering professor and a mechanical engineering adjunct professor. He previously taught at Virginia Tech, where he was the associate director of the Institute for Critical Technology and Applied Science and the Robert E. Hord Jr. Professor of Mechanical Engineering. Priya has industry experience as a senior research engineer for APC International and government experience as an IUCRC program director with the National Science Foundation.

He received his PhD in materials engineering from Penn State, where he was fortunate to be a part of the Materials Research Laboratory, an interdisciplinary group of faculty who conducted collaborative research. This experience shaped his belief that shared facilities, shared technical and administrative staff, and collaborative research have a positive impact on research enterprises.

His dissertation focused on piezoelectric materials and their usage in underwater transduction and subsequent research explores the conversion of one form of energy into another, with an emphasis on three topical areas: multifunctional materials such as piezoelectrics and multiferroics; energy harvesting such as solar cells and thermoelectrics; and bio-inspired robotics such as jellyfish and millipede inspired robots. To date, he has published over 450 peer-reviewed journal papers and book chapters and more than 60 conference proceedings. Additionally, he has published ten edited books, holds 12 patents, and has given more than 290 conference presentations and invited lectures

Originally from India, Priya earned a BS in math and physics from Allahabad University and an MS in metallurgy from the Indian Institute of Science.

Throughout his career, Priya has earned numerous honors, including the D.T. Rankin Award and the Richard M. Fulrath Award from the American Ceramic Society. He was a COR Research Leader Fellow with the Association of Public & Land-Grant Universities. Priya is the founder and chair of the Annual Energy Harvesting Meeting. Pronunciation: shuh-SHAHNK PREE-yah.

Request an Engagement with VPR Priya

VPR Priya welcomes the opportunity to speak to your organization, conference, or at an upcoming event. Please get in touch with the scheduling team by submitting a submitting a Speaking Request.