The Office of the Vice President for Research (OVPR) tracks key research metrics for the University of Minnesota, including national rankings, proposals and awards, sponsored expenditures, and technology commercialization performance measures. Several of these metrics are part of Commitments 2 and 3 in the University’s MPact 2025 dashboard and progress card.

On September 15, 2021, the University announced that it had successfully competed for $1.15 billion in external research funding in fiscal year 2021, a 31 percent jump that pushed it well past the $1 billion award mark for the first time in the University’s history. The record research awards total was fueled in part by $256 million in COVID-19-related projects.

Interim Vice President for Research Michael Oakes presented a more detailed analysis of the University’s fiscal 2021 research and technology transfer work to the Board of Regents at its December 2021 meeting. Watch the presentation from December 16, 2021 or see presentation slides, transcript, Research At-A-Glance, and Annual Report Top Five.

FY 2022 research data is being analyzed and will be presented to the University’s Board of Regents in December 2022. Data on FY 2022 external awards is available in the OVPR Research Reporting Center for analysis by departments and colleges.

The $1.15 billion research award total in FY 2021 was a record for the University. The data also showed the University maintained robust growth in many areas across the research enterprise.

Awards by Source: All Campuses, FY21 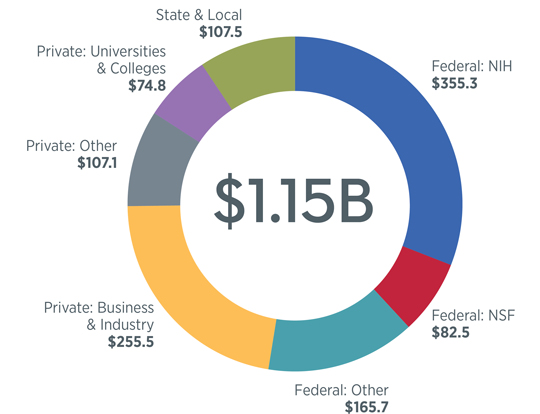 Federal awards remained the largest source of awards. Among all federal agencies, National Institutes of Health (NIH) ($355.3 million) and the National Science Foundation (NSF) ($82.5 million) awarded the most support. Agencies in the Federal: Other category include agriculture ($45.7 million), defense ($38.0 million), other health and human services ($26.9 million), energy ($21.0 million), and education ($13.6 million).

The University’s School of Public Health (SPH) and Medical School saw significant increases, with awards growing by $201.9 million (306.6 percent) and $51.9 million (18.6 percent), respectively. SPH’s portfolio was buoyed significantly by $189.8 million in awards for its Coordinating Centers for Biometric Research, which was able to quickly and nimbly meet the needs of agencies like the National Institutes of Health to test possible COVID-19 treatments in clinical trials across the nation and the globe.

External research funding to both the College of Science and Engineering and the College of Education and Human Development each increased by over $8 million.

Overall, many of the FY 2021 awards received carried large dollar amounts, with 44 percent of the total external funding comprising grants exceeding $1 million each.

UMN research expenditures, which include both external awards and internal institutional funding and are gathered and then published by NSF in the following year, rose slightly for fiscal 2020, the latest year of data released by NSF. Expenditures at the Twin Cities campus climbed 2.9 percent to $1.04 billion. That figure for all five University campuses combined grew 2.7 percent to $1.07 billion. 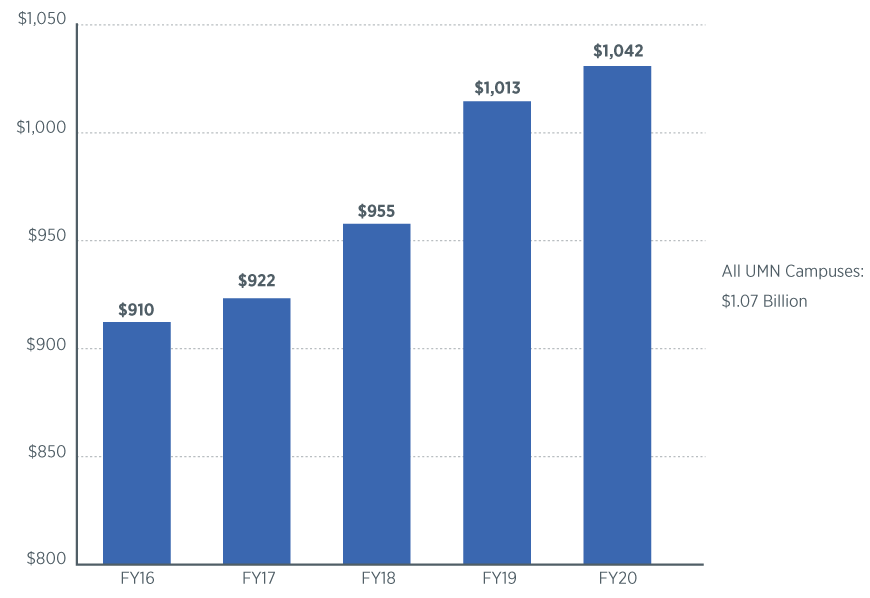 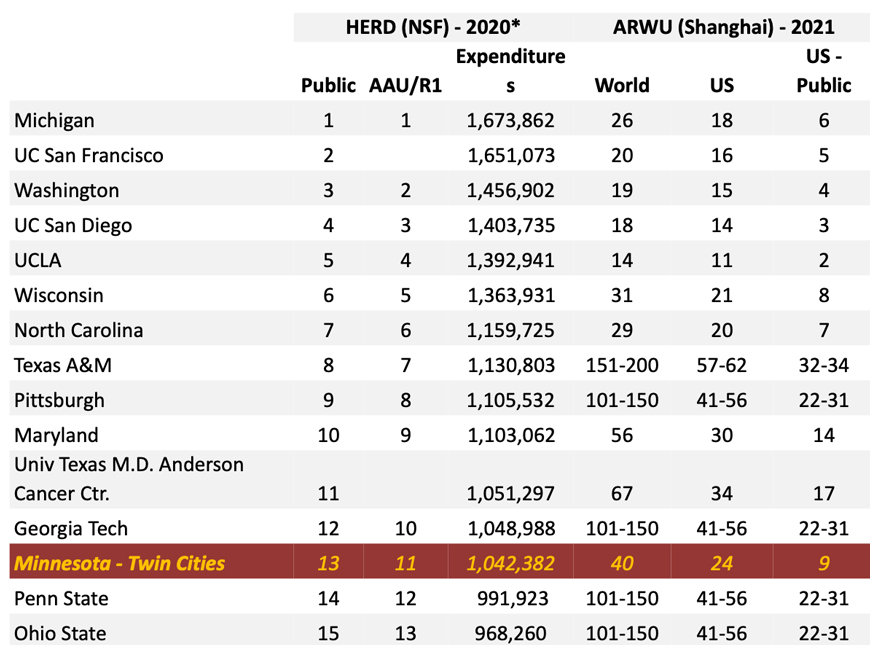 Expenditures in thousands of dollars
*Ranking among US public research institutions. AAU/R1 refers to institutions that are categorized by the Carnegie Classification of Institutions of Higher Education as an R1 institution and are members of the Association of American Universities. 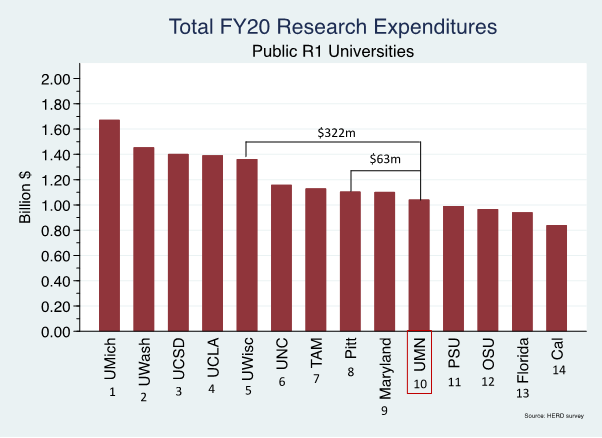 University-developed technologies reach the market through UMN Technology Commercialization, which facilitates the transfer of University research to licensee companies for the development of new products and services that benefit the public good, foster economic growth, and generate revenue to support the University’s mission.

Some of those new licenses were with startup companies. Technology Commercialization’s Venture Center launched a record 20 startup companies over the year, with 14 of them based in Minnesota. The University’s MPact 2025 plan has set a goal of spinning out 25 startups annually by 2025, and the FY 2021 total indicates the University is on a path to meet that goal.

Also during fiscal 2021, the University was issued 181 patents from US and foreign patent offices. Researchers set the foundation for future commercialization success by making 332 invention disclosures to Technology Commercialization.

In FY 2021 Technology Commercialization was part of expanded corporate engagement efforts across the University, including a master research agreement and 14 projects with Cisco Systems. Tech Comm received a 2021 Tekne Award for COVID-19 Community Response and grew its MNBridge initiative, a new commercialization gap-funding program, which received $700,000 in new external funding and helped coordinate funding for 36 UMN technologies. In addition, two UMN fruit varieties, the apple Triumph™ and pear Juicy Jewel™, were named with the help of the UMN community.

The University’s shift to COVID-19-related research also impacted its technology commercialization work, with key products included on a webpage listing more than a dozen University inventions.